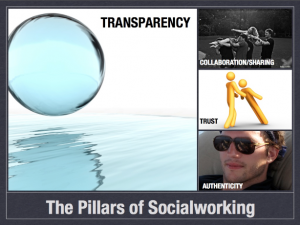 As the world turns… social, expect to be surprised by the fruits of serendipity.  When large workforces embrace working socially, or as I love to call it – in “socialworking” mode, they discover new ways of solving problems and creating opportunities.  Insights are revealed in the fluid web of connections and sharing. We’ve seen a dramatic mood swing toward all things social this year.  Even the naysayers have been touting the benefits of working socially recently.

I wanted to take the opportunity to highlight just one example of how working in a truly social organization delivers benefits that could never have been predicted in an executive conference room undergoing the scrutiny of a hard-core ROI analysis.

The Million Dollar Cry for Help

This vignette comes from our member Andrew Carusone at Lowe’s Companies, Inc. who told the story at our workshop this summer.  Lowe’s on-boarded 100% of its employee base to its collaborative platform, IBM Connections last year.  That’s every executive, store manager, retail clerk, and stock boy on the payroll.  The entire Lowe’s workforce of 289,000 employees have access to Connections.  What’s interesting is that less than 17,000 of these employees are salaried employees, and even less are members of the management team.  The challenge for the Lowe’s social business team is to inspire the employee base to turn to the platform in the course of their normal day’s work.  For some employees, it comes naturally.

During beta tests, an enterprising Paint Department employee decided to try something new to demonstrate the ease of cleaning a Teflon paint tray.  She poured latex paint into it, let it dry, and then peeled the paint out whole.  She left both the paint “mold” and the paint tray on the paint counter.  Customers were amazed and delighted. Suddenly, she was sold out of the paint trays and shoppers were clamoring for more.

The employee turned to all of her traditional channels to get additional inventory.  She accessed the company’s enterprise inventory system, however, like most major retailers, the business process tightly controls the amount of additional inventory employees can request.  After exhausting other traditional sources, the employee then turned to the Connections platform and asked “out loud”* if anyone knew how she could get more inventory.  Funny thing happened.  Although everyone felt her pain on the inventory shortage, they started replicating her paint mold/tray demo in their stores.  And guess what?   Suddenly other stores were selling out of the paint trays too.  As interest in the thread and the display idea grew in popularity, sales skyrocketed. 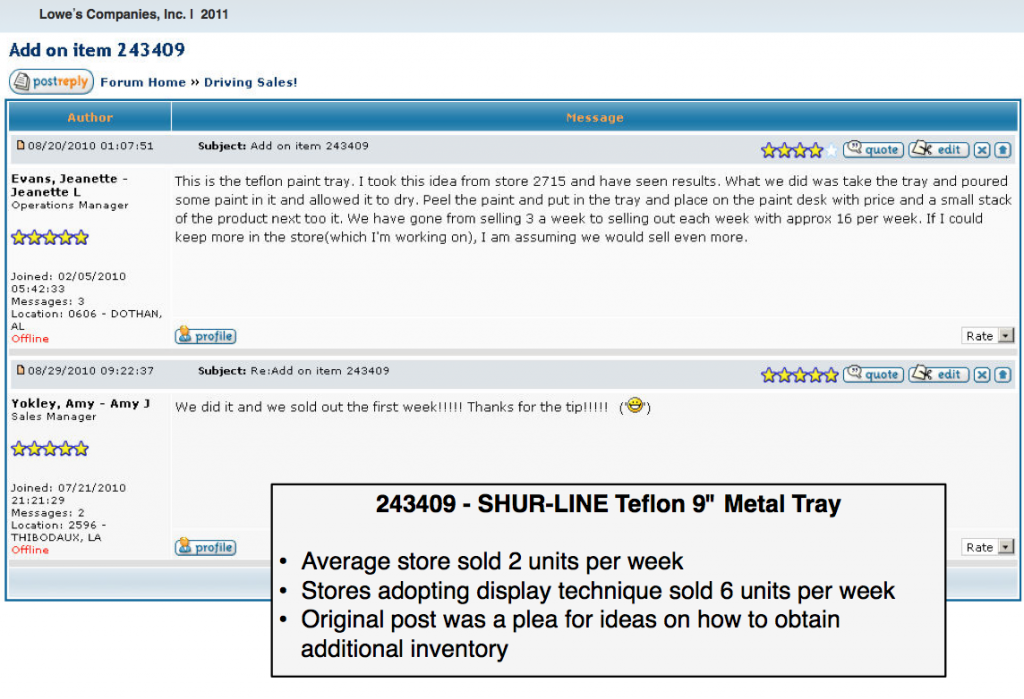 When applied on an enterprise level, the unique display idea represented more than a million dollars in additional revenue of the SHUR-LINE Teflon 9″ Metal Tray.  With that single serendipitous public share –employee-to-employee – at the kind of scale that Lowe’s enabled with its full workforce deployment, ideas like this can easily pay in full for the technology platforms that enabled it.  And this is just a single example.  Our Lowe’s members say these examples happen all the time.  I have a few more along these lines from other members I’ll post in the future.

What’s interesting to me in this example is that when the sanctioned business process that the Lowe’s employee was “workflowed” to use failed to deliver, it prompted her to seek out alternatives. (The company regulates how much inventory a store can order and when.)  She also reached out via other channels: email, phone calls, etc., with little success.   It was only after she circumvented the traditional sources and leveraged the power of pull within her employee base, did the company realize this unexpected windfall in revenue.   Not because she was able to order more inventory (her original ask), but because she shared her clever merchandising technique with the employee base creating demand for her idea far beyond her single store.  As Andy says, “What felt like a pebble – landed like a stone!”

It was the innovative idea that went viral in the company, resulting in the huge inventory demand (and subsequent sales) corporate-wide.   Smart employees throughout the ages have always found better ways to accomplish their goals, but these massive collaborative platforms are yielding leapfrogs in productivity and serendipitous wins on a large scale.  Be sure not to overlook this important upside of working socially.  In other words, “Be careful what you don’t ask for, you just might get it.”

*We talk a lot about “working out loud” in the Council.  Try it.  It just may delight you.