Rumors surrounding the death of adoption have been greatly exaggerated.

The 2.0 Enterprisey crowd is gearing up to head to Boston for our annual pilgrimage.  This will be my fourth conference as a participant and board member.  Having watched and often interpreted the trends in this sector, I find it interesting to report that things have not changed much in general since our first get-together in 2007.   While it’s true that we have many, many more organizations large and small experimenting with and committing to 2.0 strategies– internally and externally– and the business itself is morphing into something much more grand and all-encompassing, the truth of the matter is: we are still early adopters of this new way of working.

The notion of “adoption” in general occasionally gets called into criticism by bloggers who are looking at the phenomenon purely through the lens of new technology adoption.   The adoption phenomenon is much more far-reaching and encompasses a wholesale reinvention of the way we will work in the future.  Social data and social layers that will filter transactions in the enterprise are the Next Big Thing in enterprise.  Period.  But before we can get there, we need to on-ramp legions of employees to change their attitudes and behaviors to maximize the benefits of what the socially connected universe offers.

It’s easy for us who spend a lot of time on the social web to re-imagine where we are in real terms relative to widespread embrace of social strategy and tactical best practices.   This is a mistake, and we need to scale back our expectations and see the immediate opportunity for what it is: an early adopter market.  This reality has been difficult to swallow, perhaps especially for me.   We’ve kicked off our case study series and early indicators are reinforcing the relative immaturity of the market.  We’ll have more details on those in upcoming months.  The good news is: we are all really early on a phenomenon that is changing the world as we know it.  This social transformation will be larger and more comprehensive than any technology transformation (including the Internet and mobile) we’ve seen thus far.  Those of us who are in this for the long haul know this instinctively and welcome the opportunity to shape the future.

That said, the Council members (who are squarely on the front lines of galvanizing change) have been working hard to put

together some thinking on what’s working and what’s not  on the Adoption Trail.  In addition to our full-day workshop, we have an  entire track devoted to adoption issues at the conference this year.  I invite you to hear directly from these customers– at their sessions, at lunch, at the bar, in the halls… wherever they are.  You’ll know them because they’ll be wearing our pins, as well as a star on their badges.  We have over 30 Council members attending from a variety of industry sectors including: IT/High Tech, Telecommunications, Pharmaceuticals, Public Utilities, Government, Construction, Publishing, Retail, Non-Profit, Health Care, Financial Services, and Manufacturing.

On the last day of the conference, in the last session time slot, I’ve reserved time to discuss “what we missed” in our agenda planning.  As board members, we try hard to include everything topical that’s fit to present, but invariably, we could fall short and miss or underplay something important.  This session is an attempt to capture that lost content and discuss it with a panel of customers and industry thought leaders (including Dennis Howlett and Lee Bryant, as well as a team of sharp shooter Council members).  So, while you’re attending sessions, please keep a mental note of anything you feel has been missing from the dialog all week and bring it to the session.  We’re going to try and keep the session as interactive as possible.

Look forward to seeing you all in Boston.

Let’s begin at the beginning.  The beginning of the social business (r)evolution didn’t begin in with web 2.0, it began with web 1.0 in the mid-90s. From research I published in 2000, we wrote this about the company Jeff founded in 1995, Razorfish:

Razorfish’s vision states, “Everything that can be digital, WILL be”  The company claims that organizations that identify and embrace digital technology will succeed because they can react more quickly to market needs, are more efficient and customers actually enjoy doing business with them.  In addition, Razorfish claims its digital communications solutions can make implementating this technology a reality for its clients. Razorfish believes companies must reevaluate their traditional business models in order to remain competitive in the digital economy.  The company helps clients incorporate digital technologies… to better communicate and transact with their customers, suppliers, employees and other business partners.

A whole pack of Razorfish wannabes were singing the same tune in that sector at the time.  I found them fascinating.  But, in truth, it was really Jeff who wrote the original lyrics to that song.  He set the tone for revitalization and disruption.  When I came back into the business in 2006, it was that same energy with a new set of tools that attracted me to this sector.  We’ve been calling it Enterprise 2.0, but over the past few weeks, I’ve come to agree that the Social Business Design strategy the Dachis Group is promoting is synonymous with the vision I see for what’s coming, for what’s possible.  In essence, it’s the same vision Jeff had in the 90s– an extension of what has already been in motion.

In the Council, our members are truly on the front lines of massive transformation at their large enterprises. But they know it’s only the beginning of something profound.  One of our members said recently,  “I’ve never, in my 25-yr career, worked on something so valued and so feared by executives in the same company. This must be big.”

For the past few hundred years, we’ve been working the old way.  I look at this stage of market maturity as analogous to the age of enlightenment.  It’s an interesting blend of art, science, and intellectual thinking that is dominating the conversation on how we will work in the future.  One of our members referred to it as the “social spring” after the dark, aftermath of the Internet dotcom winter.  Once this digital-social idealism propagates around the globe and is embraced by leading institutions, that’s when the real work will begin, and all customers are going to need help getting to the next level of productivity and business performance.  When it does, we will be there. Ready for what’s next.

What’s next for us?

I founded the Council last summer.  Here was my introductory post to the members on why I did: 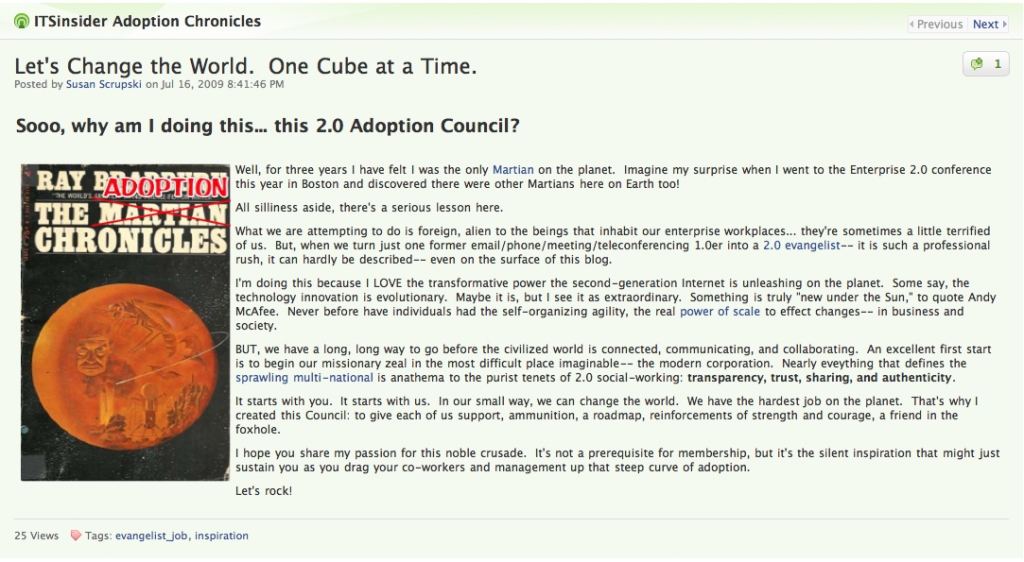 In concert with the Dachis Group, which now includes Lee Bryant and the whole Headshift team, Dion Hinchcliffe, Peter Kim, Jevon MacDonald, Bryan Menell, and Kate Niederhoffer, as well as scores of talented others, we can bring incomparable resources to our members– in programs and actionable discussion that will help them achieve their goals.  I’m truly thrilled to be joining the Dachis team and am looking forward to seeing all our hard work come to fruition.

The Council frequently conducts Q&A teleconference call-ins with e20 gurus.  The calls are very casual, but are always illuminating and worth the 60-minute investment for everyone who shows up.  Last week’s guru Q&A was with Jeff Dachis, head of The Dachis Group here in Austin.

As I listened to Jeff’s preamble about who he was and where he came from, it surprised me that I forgot this is the same

Jeff Dachis that jump-started a new sector in the IT services space in the late 90s when big corporations were smirking about the oncoming Internet revolution.  Of course, during the dotcom heyday, you couldn’t tell what was a sock puppet from what what was real. The easiest course of action was to deny anything was happening.  (There’s a big story in what actually did happen in the e-services sector, but that’s a story for another day.)  The fact that the market crashed made it look like the naysayers were right.  Yet, a decade later, most everyone will agree the Internet did change the world as we knew it, and it changed the business world irrevocably.  Jeff himself was the one who said, “In the future, everything that can be digital, will be.”  While we were on the call, Jeff described the post dot-com era as the “Internet winter.”  One of our members chimed in immediately with, “We’ve awoken now to the Social spring.”  That is a great metaphor to describe the phenomenon that’s now unfolding.

In 2006-7, everyone watching this new space of Enterprise Web 2.0 was eager to share what they knew, spontaneously connecting and collaborating.  All the up-and-coming experts emerging in the space all knew each other and helped define and chisel the image of the new market opportunity.  I’d say by mid-2009, everyone recognized the market was maturing.  It was about that time I launched the Council, and soon after, Headshift was acquired by the Dachis Group. Other alliances formed over the past year, e.g., through Gartner’s acquisition of Burton Group, Mike Gotta can now teach Gartner clients about e20, Oliver Marks and Sameer Patel joined forces to create the Sovos Group, Gil Yehuda went to work in Silicon Valley, and the Altimeter Group is crossing over into the sector with its focus on social CRM.

The cheese that stood alone in the consulting crowd was Dion Hinchcliffe whom I once referred to as separated by birth from the Dalai Lama.  Today, Dion is announcing his company has also been purchased by The Dachis Group.  This is a terrific development in our sector as the consultants who’ve been independent are recognizing there is a tremendous amount of demand to understand and adapt to the technology-driven disruption and innovation that is exploding around the globe as a result of the socially interconnected web.  Where the majority of our members in the Council are inventing wheels for the first time, the extension of their hard work will require a bench of professional talent.  In order for consultants to meet that demand, consolidation is the only way to deliver by taking advantage of economies of scale. Whether the opportunity is strategy, technical integration, education, or assistance with deployment, the days for external evangelism are probably coming to an end.  The idealism that led the first era of this sector has now been replaced with pragmatism and will help businesses of all size move to the next level.

It reminds me of the boutique firms that cropped up in other eras that helped large companies manage the transition from before to after. Over time, the large consultancies will enter the market.  That’s when we’ll know we’ve arrived.  I’ve already seen some interesting arrangements with off-shore firms who have some unique capabilities to bring to the party.  As this business turns its attention to growing up, I applaud the pioneering efforts of these early bloggers and teachers who’ve brought us to this point.  So whether we quibble over our own insular naming conventions or accurate assessments of what is is, one thing is for certain, we’re ready for take off.  Buckle up.