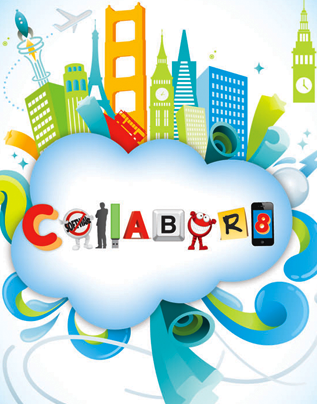 The gala event, Dreamforce,  isn’t really my gig. The Enterprise Irregulars know “up and down and sideways” everything related to Cloud-computing. One of our EIs, Anshu Sharma, was a key architect  of Salesforce’s database.com offering announced last week.   In short, I spare everyone my uninformed opinion on most things Cloud-computing related for which I’m certain my EI pals and everyone else is grateful. But, because I’m an Enterprise Irregular blogger, I guess, I was invited to attend Dreamforce this year.  And even though I’m not really clued into Salesforce (the company), I accepted the invite because I wanted to see for myself – eyes and ears on the ground – what Chatter was all about and how it would fit into the social business landscape.

The good news on Chatter

The good news on Chatter is more about Salesforce.com than it is about Chatter the social tool. Like I said last year, having Benioff move front and center to embrace the social revolution is like a dream come true.   This sector needs a Benioff.   Grafting on JP Rangaswami to the SFDC social story was pretty slick as well. It occurred to me at Dreamforce that an item that has been conspicuously absent in the internal social-collaboration space (heretofore  called Enterprise 2.0) has been high quality marketing with great creative and real reach beyond the echo chamber we’ve been nestled in for the past four years.   So, the combination of Benioff who’s somewhat larger than life in real life and agency-designed creative is a huge plus to our sector.  Score one for professional marketing, awareness building, promotion, and tech rockstar iconoclasts. Related is the nature of Salesforce’s corporate culture. Again, I admit ignorance writing about a company I don’t know very well, but there is a detectable undercurrent of raw ambition that seems to drive the company ethos. It’s also a winner-takes-all, scrappy underdog vibe that is easy to spot from Benioff’s jabs at old skool enterprise vendors and thinking, to the high energy vibe on the floor of the Cloud Expo exhibit hall emanating from Salesforce employees and partners. Score two for raw ambition and high energy.  To make a distinction, Salesforce strikes me as the perfect blend of raw ambition without hubris. That’s tough to achieve in a competitive market, but that’s how I see it.  From a company whose primary customer is sales people, it kinda makes sense.   The remaining plus in Salesforce’s corner is its deep technology prowess and its playa status in the broader tech market due in some part to its status as a public company with revenues over $1B.  It’s unlikely to me that Chatter will face any technical obstacle it can’t solve or any partner who’ll reject its overtures. So, score three for technology wunderkind with deep pockets.

The bad news on Chatter

Even though it was announced last year at Dreamforce, Chatter is late to the party.  In the Council, we have hundreds (yes, hundreds) of the largest enterprises in the world already engaged in a social business initiative.   Granted, Dreamforce, is like a “revival” (h/t Dennis Howlett) for Salesforce customers and its ecosystem, so there was a lot of giddiness surrounding Chatter and its game-changing energy.   I found myself commenting to my blogger friends, I felt like I was surrounded in a sea of n00bs who just discovered social.  That’s actually not bad news, but it is bad news if the legions of non-converted enterprise employees flock to social via SFDC and cause a disruptive wrinkle (and endless analysis paralysis) in the strategic plan that’s already underway on another platform.  In truth, most of our members are not zealots for their platform (well, some are), but most of them simply want to deliver the best social collaboration platform for the company.  When we first started discussing the Chatter phenomenon, most of our members said something similar to this,

“I am a little worried about it “cannibalizing” some of what we are trying to do.”

Remember, the Council represents a small minority of all organizations on the planet who will eventually move to social platforms.  But, they happen to be some of the furthest along and most advanced.  One of our members summed up a good response after it was all said and done,

“I just got off the phone with Salesforce, followed by a conversation with our internal team that manages it. We will “turn it on” for current Salesforce users only. It will not be positioned for or compete with our enterprise solution. In doing so, we get data on how many Sales folks choose the “Hide Chatter” button, and if by some chance it does take off wildly, that becomes a good problem to solve later next year, and we can look at a much bigger play…”

So, net net Chatter arriving on the scene is probably a good thing for our sector.  I personally am counting on those ambitious SFDC n00bs to spread the word far and wide to the unconverted.  The faster social becomes a phenomenon in the Enterprise, the sooner we get to the promised land.